Prep: 20 minutes, plus any additional time for your prep/toppings

Cooking: depends on your toppings!

The definitive guide to how to construct a delicious vinaigrette-based salad. This prototypical salad was based off of Ethan Chlebowski's brussel sprout salad, and is meant to be a rough guide for you to use when making a salad. While this recipe does say it's only made for one, you could scale this up for a group of people! 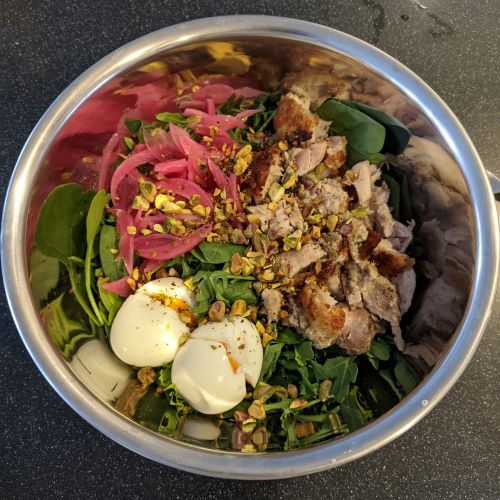 Who would've thought that salads could be so scrumptious!

Something juicy (the protein) 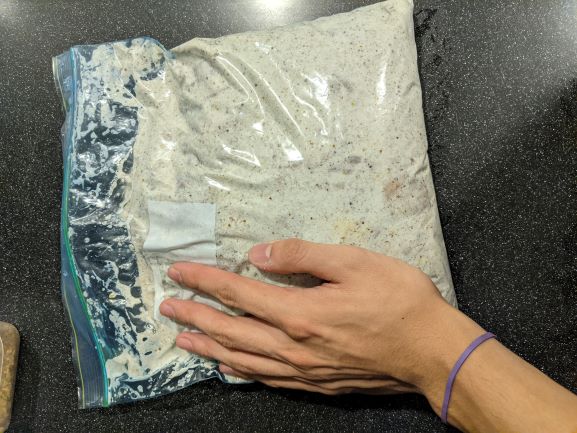 Prepare and cook the protein you want to add. In my case I like to marinade a bunch of chicken thighs according to this shawarma recipe and leave it in the fridge. Whenever I need a chicken thigh for a meal I'll throw one in the oven for 30 minutes (on a higher rack) and cut it up into bite sized pieces for the salad. Besides just meats, you could even use beans, tofu, fish, really whatever you can come up with! This juiciness is supposed to contrast and balance the crunchiness and freshness of the leaves!

FOR THE LAZY: You could also buy some rotisserie chicken or even use leftovers for this part!

BONUS: If you're roasting protein like I am here, a great idea would be to pour the juices at the bottom of the roasting pan into your salad!

Something leafy (the salad base) 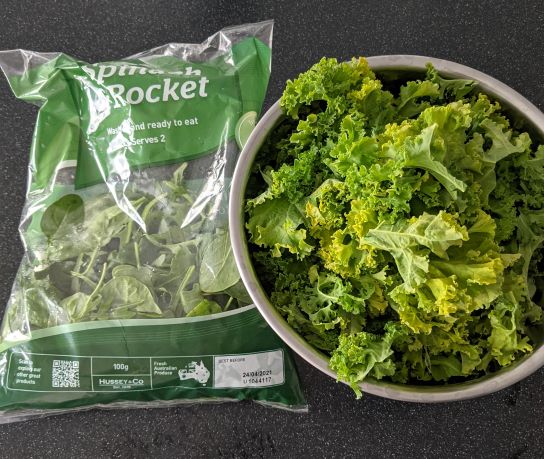 Prepare your salad base by breaking it up into small bite sized pieces. I hate salads that give you an entire leaf. This time I went with a base of kale, baby spinach and rocket. I like this mix personally because the cragginess of the kale leaves hold the vinaigrette very well. I'm also a fan of thinly sliced raw brussel sprouts (as per the original recipe) - both are great at juice retention.

FOR THE LAZY: What I like to do is prep a BUNCH of leafy vegetables portioned into tupperware. That way you have portions of leaves you can dump into your salad bowl with no additional prep. You can also be SUPER lazy and buy some pre mixed salad leaves, but I don't normally like their mixes. 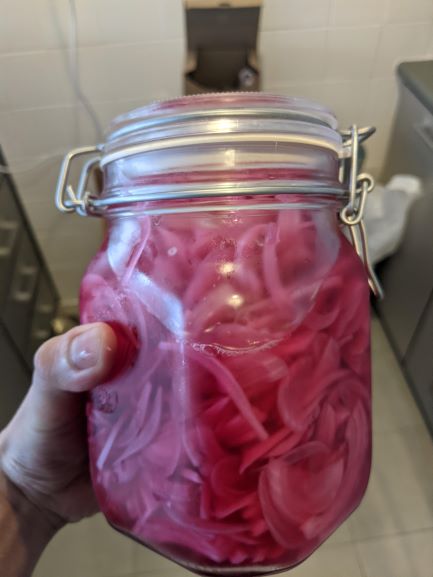 For this category, you want to find something that's sour to add to your salad. The acidity of this topping is meant to balance out the oiliness of the protein that you add. I would highly recommend only adding a single thing that's sour - too much of this can quickly overpower your salad.

I used pickled red onions from here. I highly recommend trying out these onions - all you need to do is cut 4-5 red onions into slices, put them in a mason jar, and fill with boiling pickling liquid - in my case I used equal parts distilled white vinegar and water (along with salt and whatever other herbs you want! I added bay leaves and some black pepper). Seal the jar and let this sit in your fridge for at least a night. This stuff really goes on everything, especially if you're trying to add a bit of tanginess into your meal!

FOR THE LAZY: I REALLY recommend trying out the pickled red onions! But if you're really in a rush, you could also add apple slices or even cherry tomatoes instead. 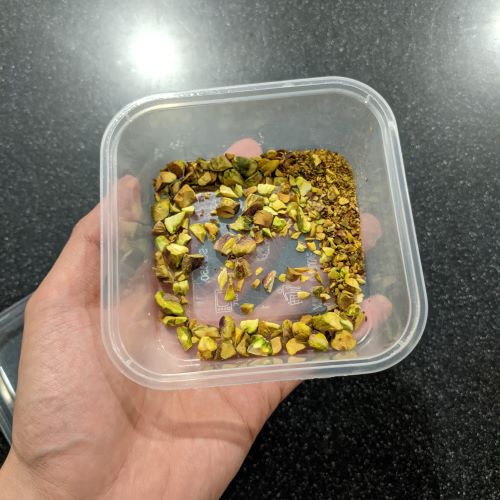 Simple as it sounds - find something crunchy to add to the salad to give your salad a nice crunch. I used toasted, peeled pistachios for this recipe. I buy peeled pistachios, roughly chop it up into smaller pieces and put it in a pan over medium heat, tossing constantly until lightly golden.

FOR THE LAZY: Besides nuts, you could also just buy some pita chips, crunch it up and sprinkle it on top instead! 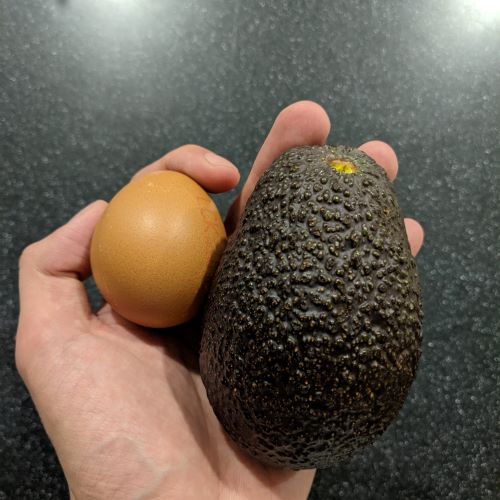 Finally (besides the vinaigrette), you want to add something creamy into the mix to complement the tanginess. In my case I used two soft-boiled eggs, but I highly recommend using half a sliced avocado. Besides adding an extra creamy texture into your salad, it also does a great job at filling you up.

FOR THE LAZY: Buy some pre-grated cheese (I'd recommend parmesan) and sprinkle some of that in. 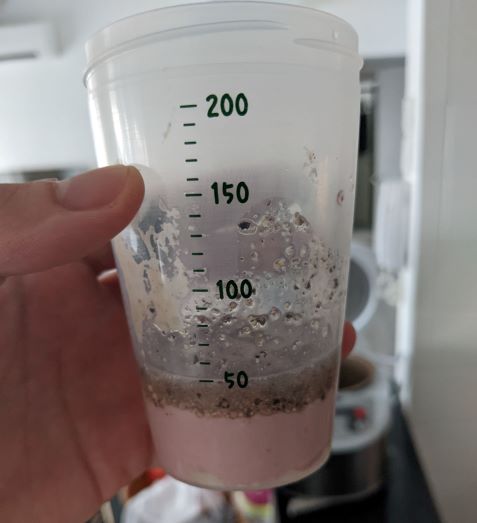 Now for the finishing touch - the vinaigrette. A vinaigrette is essentially 3 parts: An oil, an emulsifier (something creamy) and some form of vinegar. Add these three into a small container that is airtight you can shake, and shake until homogenous. I normally like a creamier vinaigrette, so I use a 1:1:0.5 ratio of oil to emulsifier to vinegar.

Here I use light olive oil, a tahini sauce mix I made (tahini, garlic and lemon juice) and the pickling juice from the pickled onions. Along with three base ingredients, add some salt, pepper and honey to the mix. I like to continually adjust the vinaigrette to my tastes - for example if I don't feel like it's tangy enough I'll add more vinegar. I've also used dijon mustard as the emulsifier before in the past, I would also recommend trying that!

FOR THE LAZY: Buy some balsamic vinaigrette and use that. 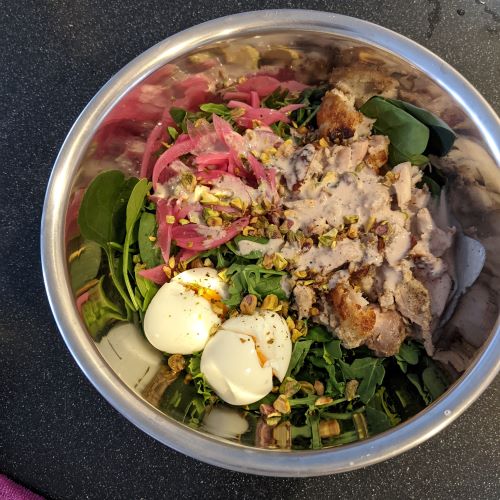 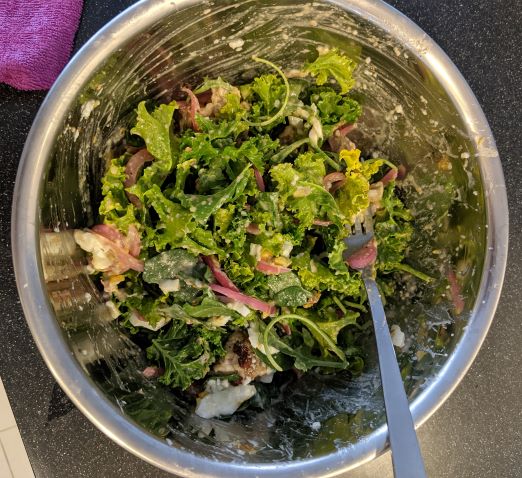 Finally it's time to assemble. Honestly it's not too important how you assemble your above components since you're going to be mixing everything anyways. If you're trying to get a photo of your salad show to others how health conscious you are, then you can do what I did and place everything (except for the something crunchy) on top of your leaves, then sprinkle your something crunchy on top and drizzle in half your vinaigrette. After you're done feeding your ego, toss with a fork (or even your hands if it's a big salad) and drizzle in the rest of your vinaigrette half way through. You'll notice you don't actually need much sauce for this salad if you toss thoroughly.

FOR THE LAZY: ... Just eat the salad layer by layer? Toss your salad you lazy bum!

And that's it! Enjoy your salad and let me know what additions you've tried adding in yourself. SEND ME PICS OF SALAD! 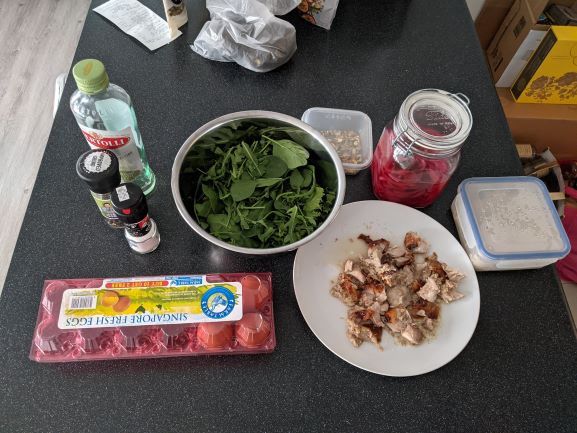